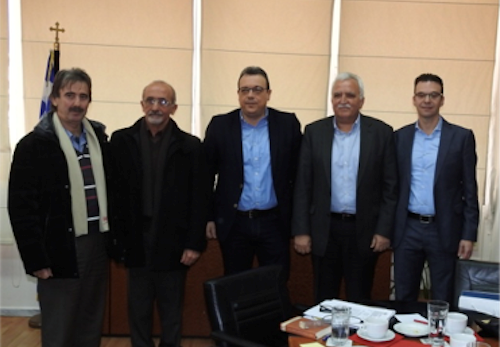 On 3 January, 2017 the Deputy Minister of Environment and Energy, Sokratis Famellos, visited the head offices of the Decentralized Administration of Macedonia and Thrace (DAMT) in Thessaloniki. The Minister was welcomed by the General Secretary of DAMT, Nikitas Fragkiskakis and he participated in successive meetings.

Initially he met with the General Directors of Forests & Rural Affairs, of Internal Management and of Environmental Planning & Policy, while afterwards, during his appointment with the Director of Coordination & Supervision of Forests and executives of the Forest Services of DAMT, he heard their views and proposals concerning issues about Protection and Management of Forests and Financing of Forest Projects.

Amongst other, Deputy Minister was informed about the European Projects in which Forest Services of Decentralized Administration of Macedonia and Thrace are involved: