Seemla pilot cases: read the updates from the national sites

One of the key activities of the Seemla project, is the one related to the exploitation and performing experimental case studies for evaluating and optimizing biomass production tools for MagL under practical conditions. This work package will provide a practical approach that will be developed and refined during the project.
The SEEMLA approach will be developed in the following European regions: Lusatia, in Germany, East Macedonia and Thrace, in Greece, as well as Vinnitsa, Poltava Volyn and Lviv in Ukraine.

1) The Welzow test site, located approx. 20 km south of the city of Cottbus was successfully established in spring 2017. Black locust (Robinia pseudoacacia) was planted on an area of 3 ha in size in the recultivation zone of the active lignite mine Welzow-Süd. The study site received only minimal input. No ploughing or harrowing was applied before planting. Seedlings of Black Locust were planted using a tractor based planting machine, trenching the soil for direct insertion of seedlings in a scheme of 2.4 m by 1.0 m. Hence, approx. 12 750 seedlings have been planted on the total area of 3 ha and 4 250 per ha, respectively. So far no care and maintenance measures were carried out on the site and no herbicides and pesticides were used. Additionally, the site was not irrigated. During the growing season 2017 the site was continuously monitored. For that purpose five monitoring plots, each containing about 75 to 90 individual Robinia trees, which are spread regularly over the site were established. Within these plots following parameters were regularly assessed: survival rate, tree hight, stem diameter and additionally damage caused by wild animals was monitored. Moreover basic climatic parameters, such as precipitation, temperature, radiation and wind speed were recorded for the test site. The plantation has established very well during 2017. Monitoring revealed that in average more than 94% of planted trees survived in the monitored plots. Trees grew gradually over the season and reached average heights of approx. 1.0 m. However, statistical variance was huge and some trees even peeked to 1.80 m. Between 50% to 75% of Robinia trees were affected by animals which frequently bite/ cut the terminal shoot. After a very dry spring with only 25 mm of precipitation in both April and May the plantation obviously benefited from an exceptional wet summer with high precipitation particularly in June and July. In the up coming second growing season in 2018 monitoring on the site will be continued and presumably an estimate on potential yield of that site can be derived from recorded data.

2) The second test site is located in the south east of the city of Cottbus on a former railways operation area. The site was prepared for plantation in autumn 2017. For that purpose the area was cleaned up by cutting weeds and residual trees. As soil at that site consists mainly of sand and moreover contains high amounts of gravel and construction debris, composted bio solids originated from methane production will be applied to designated parts of the site. The plantation can be finalized presumably by March 2018. 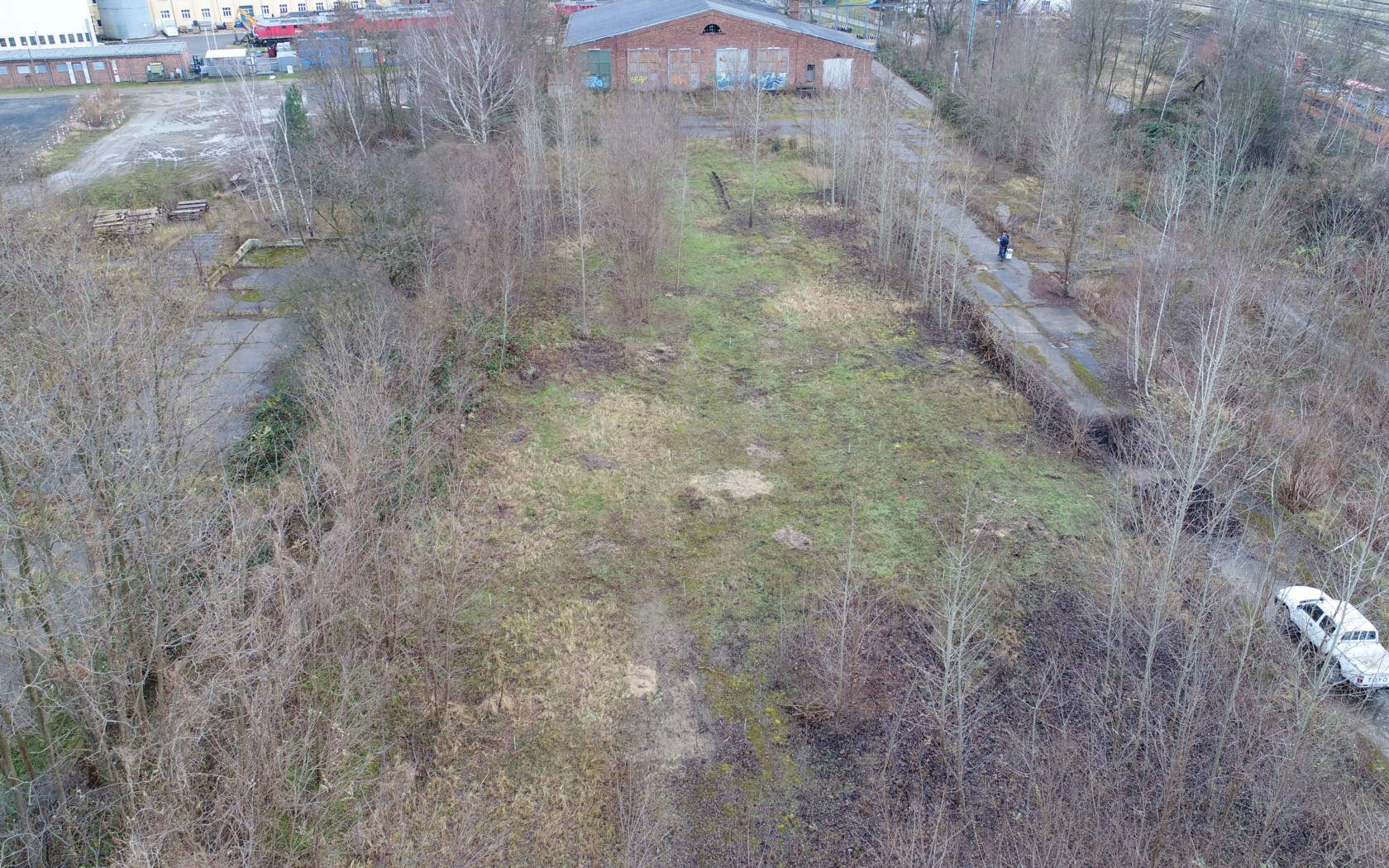 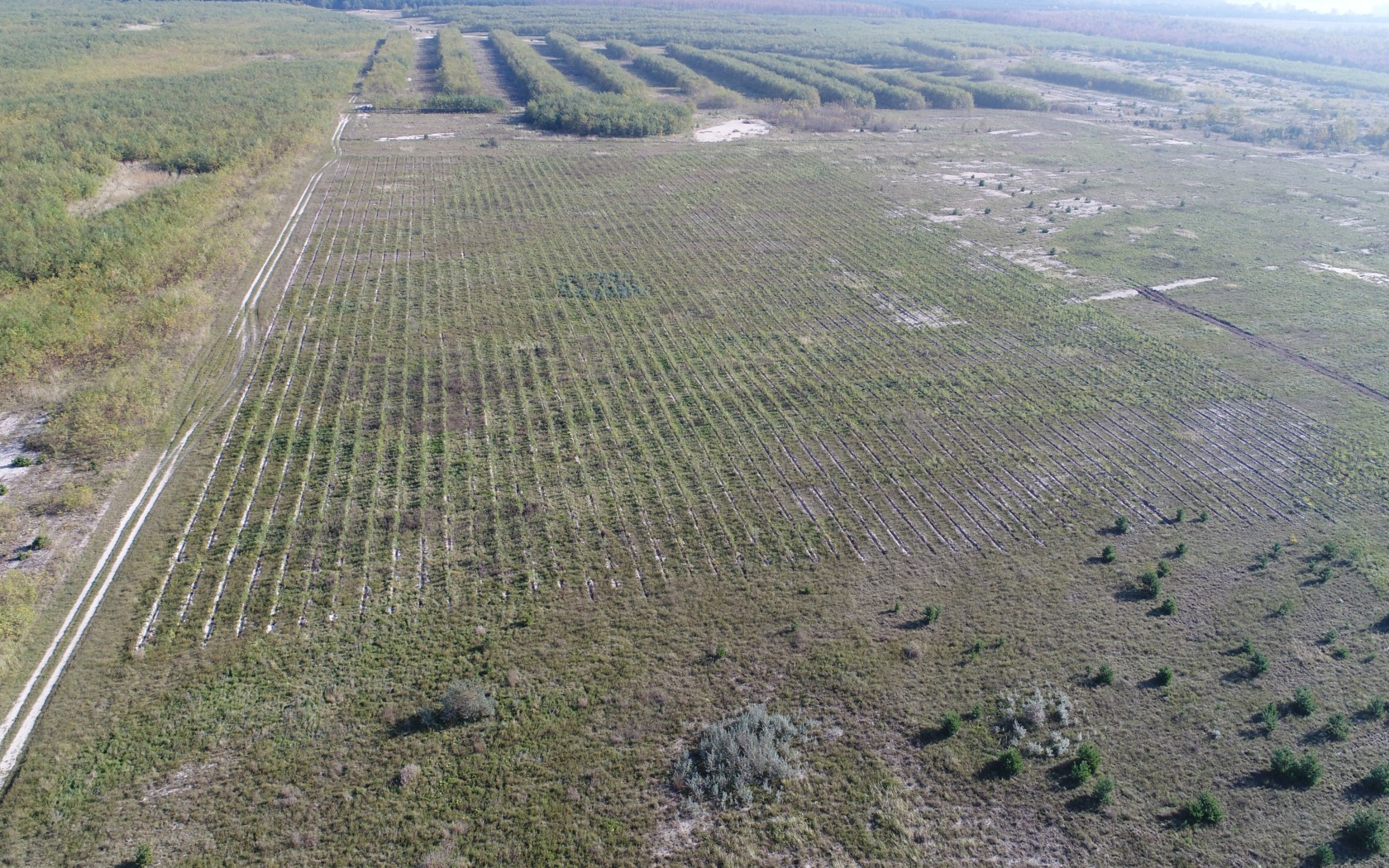 The three (3) SEEMLA study cases in Greece are located in the region of Eastern Macedonia and Thrace in the north-eastern part of Greece, around the city of Komotini (about 250 km from Thessaloniki). The region is characterized by a mountainous topography and Mediterranean climate conditions. The poor forest sites, selected as Greek study cases, show shallow and stony soils as a result of previous erosion processes.

Plot 1 covers an area of 0.1 ha and is located near to Pelagia village, 22 km (south east) from Komotini city, at an altitude of 98 m. On this plot, it is planned to proceed with harvesting an existing artificial forest plantation of Calabrian pine (Pinus brutia).

Plot 2 covers an area of 0.2 ha and is located near to Drosia village, 33 km (north east) from Komotini city, at an altitude of 590 – 600 m. On this site we have recently established an artificial forest plantation of black pine (Pinus nigra) and black locust (Robinia pseudoacacia), while, for biomass assessment, we are planning to proceed with harvesting an existing artificial forest plantation of black pine in a nearby cluster.

Plot 3 covers an area of 0.1 ha and is located near to Sarakini village, 42 km (north) from Komotini city, at an altitude of 500 m. On this plot, it is also planned to proceed with harvesting an existing artificial forest plantation of black locust (Robinia pseudoacacia).

I. At the end of October till mid-November 2017, we proceeded with the establishment of the new plantation at plot 2 “Drosia”, as mentioned above. Planting was scheduled to take place during the previous planting period, but due to the last heavy winter and the bad weather conditions last year (snowfalls and very low temperatures for a long period), we had to postpone all the planting works. 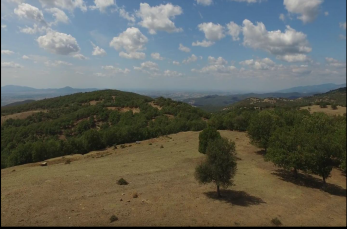 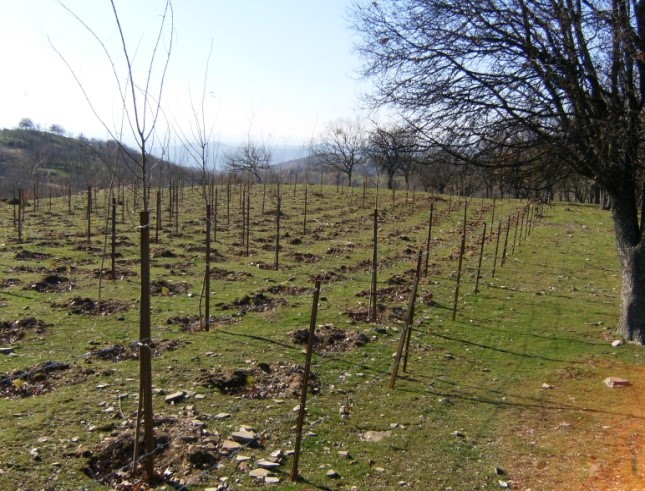 According to the technical study we had carried out in order to ensure the successful establishment of the plantation, we proceeded with planting the trees manually (eco method), while we erected a fence around the plot for its protection of grazing. We used 891 trees in total, 567 trees of black pine and 324 of black locust, all of different ages (1-4 years old), so as to draw safe conclusions about the growth rhythm and wood production. Furthermore, during the following months we are going to implement the necessary irrigation and fertilisation and remove grass and weeds when needed.

II. In order to meet the needs of the project (data selection for the LCA analysis) we have already started studying the plots 1 & 3 and the cluster of existing forest plantation that exists nearby the plot 2. We took measurements from standing trees, such as height, basal diameter of trunk, branch wood percentage, etc., for determining growth, increase of volume by year and wet wood production. Particularly, we have counted the trees and have measured the diameter at breast height for all of them, as well as the merchantable height of the trunks (with relascope). We also calculated the diameter of the average tree for every size class of trees, the stem form factor and the circular surface of the average tree for every size class of trees and the overall circular surface & volume. 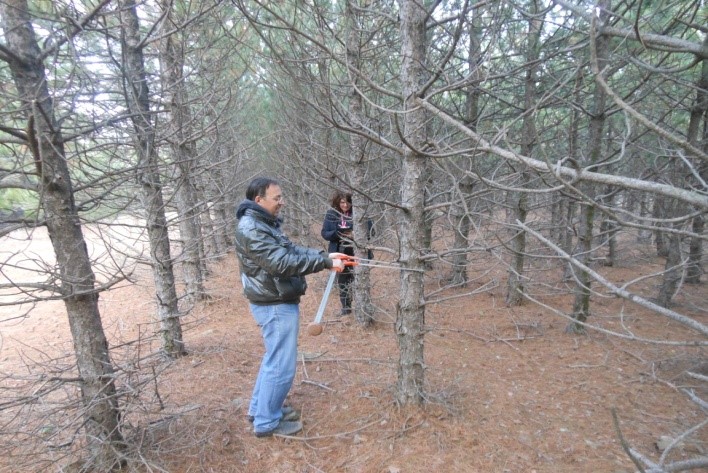 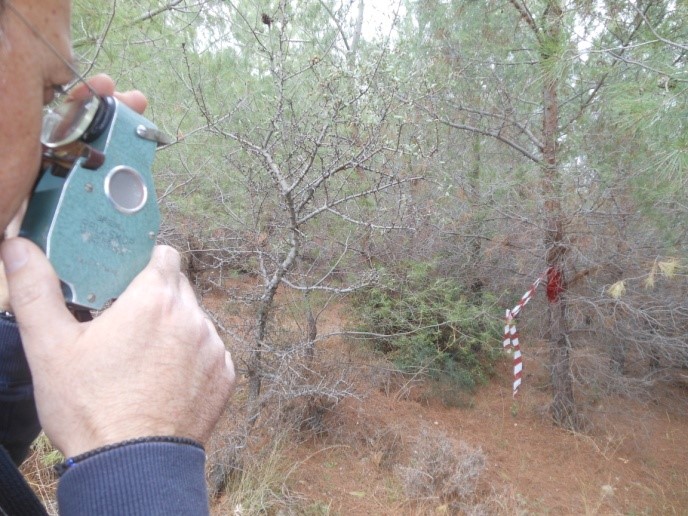 III. Over the following months we are planning to do the same for the new plantation and additionally take wood samples from the trunks and branches, as to proceed with the rest required measurements, weight of wood, wet and dry volume, bark thickness, moisture percentage, etc. 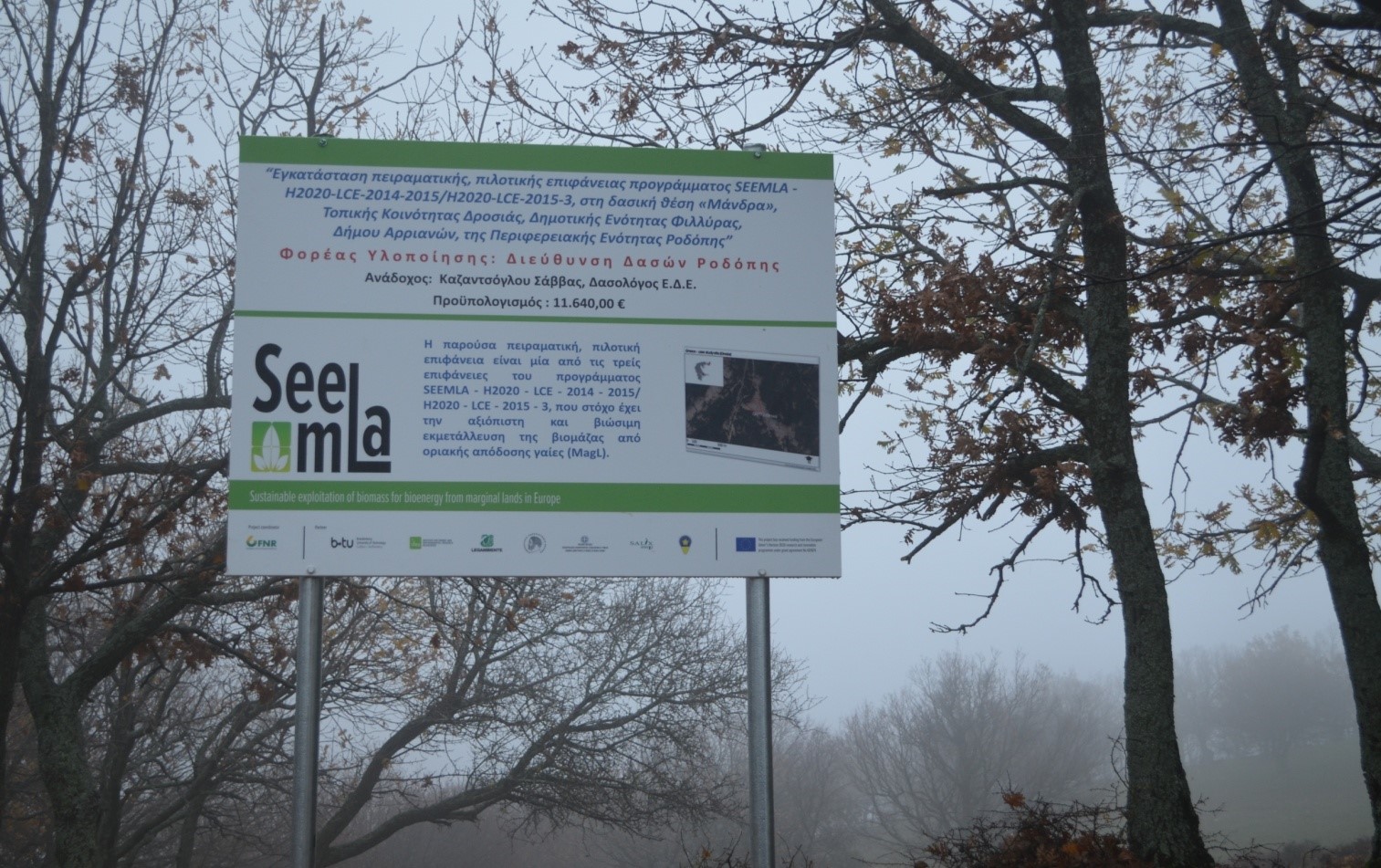 The pilot site was established in the spring of 2017 on the site of the former landfill of solid household waste. The area of the pilot site measures 1.2 hectares which include 0.9 hectares of willow and 0.3 hectares of miscanthus stands. Bioenergy crops were planted in April 2017. Ukrainian miscanthus variety  “Osinnii Zorestsvit” and willow variety “Zbruch” were planted at the site. Willow survival made up 89% and Miscanthus 85%. Despite complicated weather conditions, the plants at the pilot site are in a good condition. At the end of the growing season, the height of willow plants was 144.6 cm and diameter of shoots 10 mm, while the height of the miscanthus was 129.6 cm, with the number of stems 11 and diameter of stems of 8 mm. 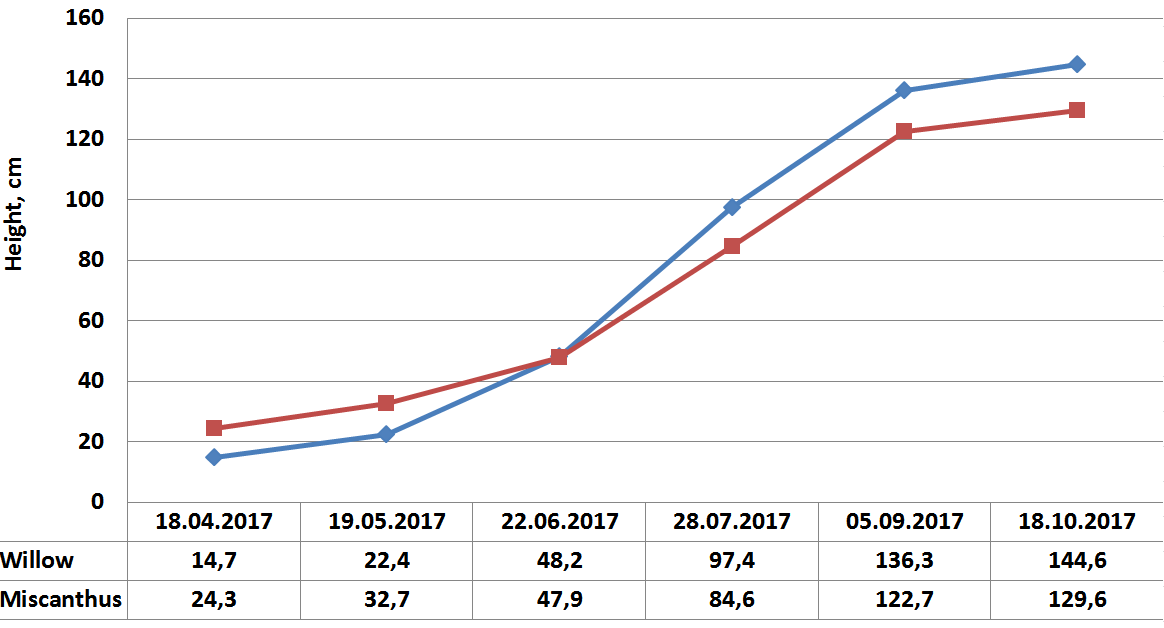 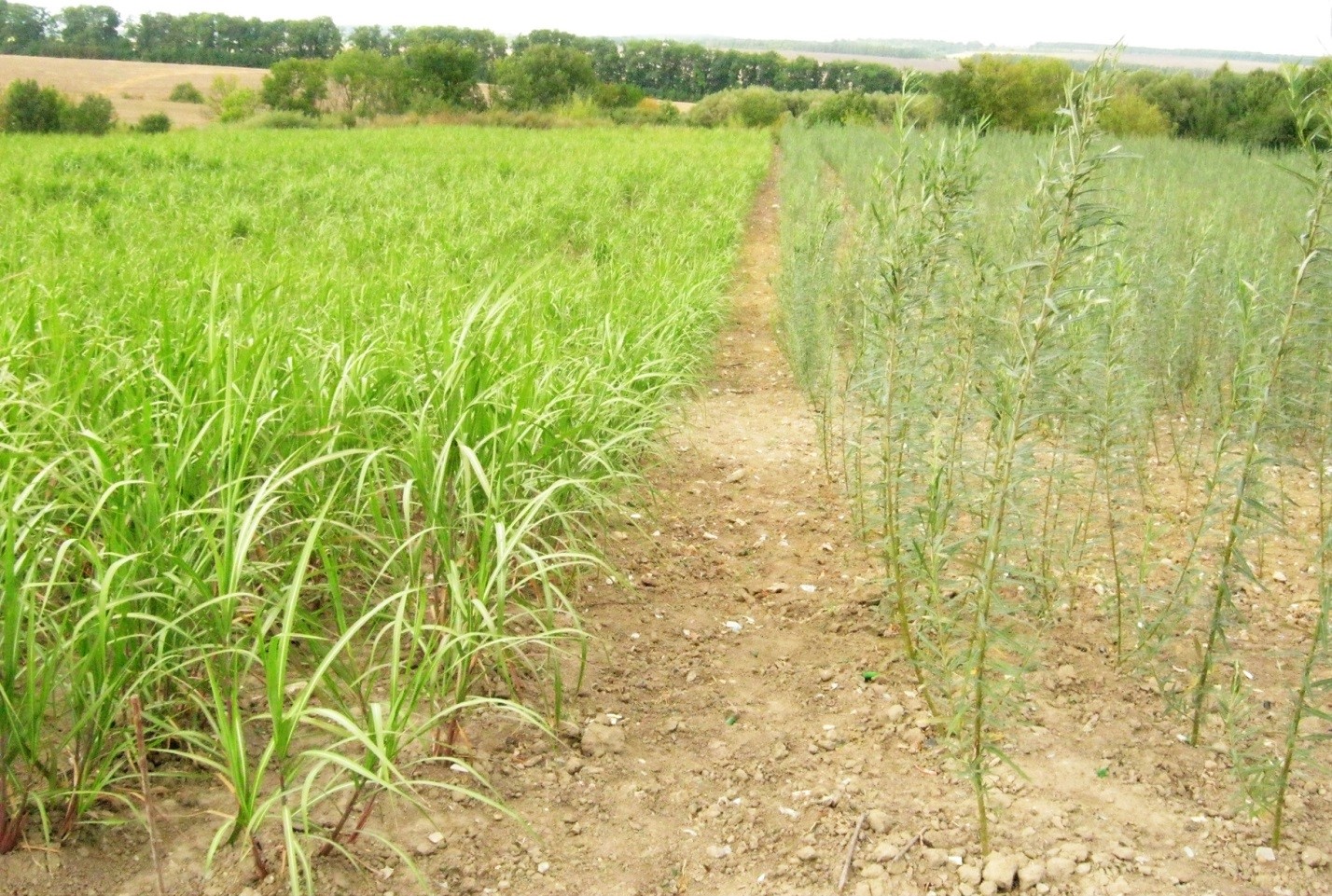